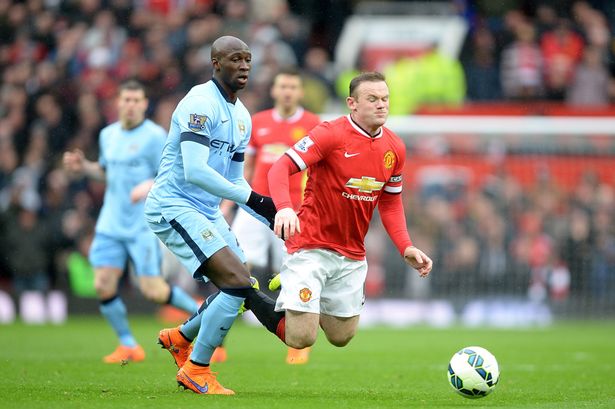 Derby day: Manchester United’s clash with City is the standout match of the weekend

The end of the week is nigh, which means only one thing – the Premier League is almost back.

Come Saturday it will have been five long, arduous days since the last top flight encounter was played out and it has simply been unbearable.

The Champions League plugged the gap slightly but it just isn’t the same.

Luckily, you’re in for a treat with the Manchester derby and the Tyne-Wear derby among four games televised across Saturday and Sunday this weekend.

That’ll give you a good chance to keep an eye on your iTeam players and scout new ones for future weeks.

What you really want to know though, is how to line your team up THIS week. Well, look no further. Here are our tips…

The knee injury which forced Daniel Sturridge out of Liverpool’s draw at Tottenham also keeps him out Saturday’s home clash with Southampton.

Crocked: Daniel Sturridge is out with a knee injury

Arsenal midfielder Aaron Ramsey sustained a hamstring injury in the Gunners’ midweek win over Bayern Munich and won’t be available against Everton.

As was already known, Manchester City go into the Manchester derby without key players David Silva and Sergio Aguero, who are sidelined with ankle and hamstring injuries respectively.

Ashley Young scored for United in last season’s 4-2 derby win at Old Trafford but missed the Red Devils’ draw in Moscow with a shin injury and is expected to miss out on Sunday.

Nacer Chadli will miss Tottenham’s trip to Bournemouth with a foot injury.

With United and City meeting in the Manchester derby and Chelsea facing a tricky trip to in-form West Ham, it would probably be wise and economical to stay away from players from those three teams.

With Arsenal on a stunning run of form and hosting Everton, fresh off the back of a home drubbing by United, the sensible thing to do would be to flood a few Gunners into your team.

Alexis Sanchez is a must-have after six goals in his last three top flight appearances.

A midweek goal for Mesut Ozil, who has grabbed six Premier League assists this season, will give him confidence going into the encounter against the Toffees.

Eden Hazard shone against Dynamo Kiev in midweek but he’s still far from his electric best.

With the inconsistent Chelsea travelling to Upton Park, Hazard is simply too expensive a risk to take.

Off colour: Hazard isn’t worth the cash

The same can be said for Cesc Fabregas, who has been woeful in comparison to last season.

Stoke playmaker Bojan made the difference in the Potters’ 1-0 over Swansea on Monday night and he will fancy his chances of getting on the scoresheet again when Mark Hughes’ side host newly-promoted Watford, who are without a win in their last three matches.

Jamie Vardy is offering guaranteed goals right now. With nine Premier League goals to his name this season, you’d be daft not to include him.

Who should be my captain?

Alexis Sanchez simply has to be your skipper this week.

In the goals: The Chilean has scored six goals in his last three top flight appearances

The Chilean didn’t score in the win over Bayern Munich but operated with class all night and looked as sharp as ever.

He had scored in the six games prior to that for club and country and should get back on the goalscoring trail against Everton.

In the weekend after this one, the standout game is Liverpool’s trip to Chelsea.

Manchester City are surely the bankers of that weekend with a home match against Norwich on their schedule.

Big blow: Tim Krul is out for the season

Out: Walters, Given, Diouf, Shawcross

Lengthy: Nacer Chadli will be out until December with an ankle injury