International Break is Over! Bring on Gameweek 9 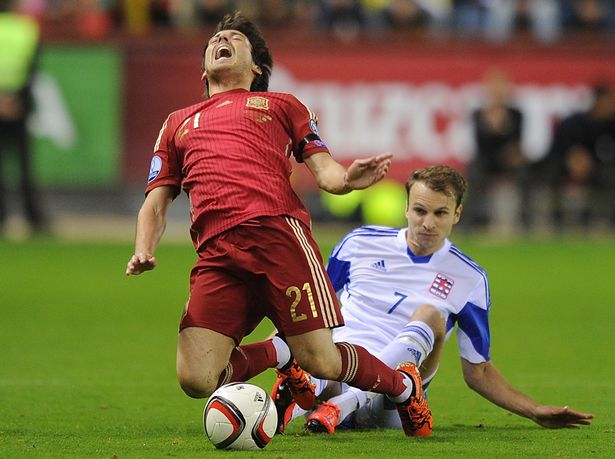 Without even playing a game, Liverpool have endured 10 days from hell after losing both Joe Gomez and Danny Ings to cruciate knee ligament injuries, plus Jordan Rossiter.

Both are expected to be out for the foreseeable future and could well miss the rest of the season as they recover.

Manchester City also had a tough fortnight, with Sergio Aguero and David Silva both ruled out for the next few weeks. Aleksandar Kolarov will also be missing for the leaders’ clash with Bournemouth.

Dow and out: David Silva is out of action this weekend

Manchester United have lost Paddy McNair as a defensive option after he punctured his liver for Northern Ireland, while Marcos Rojo also remains a doubt. Ashley Youngis not expected to be fit either.

Similar doubts for Arsenal at the back as Laurent Koscielny will have his fitness tested as close to kick-off as possible.

Elsewhere, Chelsea will be without Branislav Ivanovic for a couple of weeks, Southampton will not be able to call on Shane Long and Tottenham’s Son Heung-min is out for a further three weeks.

Eric Dier is suspended, as are Sunderland duo Jermain Lens and Sebastian Coates.

Two teams in dire need of a result are Chelsea and Aston Villa – but a win for the former seems a far more attractive prospect.

Chelsea have not got out of first gear this season and a game against tactically-shaky opposition in Aston Villa could kick-start their pursuit of a top four spot.

Eden Hazard has yet to get close to his breathtaking performances of last season, while Cesc Fabregas, Diego Costa and Willian have plenty to offer against weaker opposition.

Backing: It could be worth giving Chelsea’s stars your backing

Backing your Chelsea flops to finally flourish could put you onto a winner this weekend.

Manchester City’s second string could be worth a call-up too. With Aguero and Silva injured, Kevin De Bruyne, Raheem Sterling and Fernandinho could prove to be the main men for City against Bournemouth.

The Cherries will not be coming to the Etihad expecting to win – and a clean sheet from Vincent Kompany and his partner (Eliaquim Mangala or Nicolas Otamendi – it’s almost a lucky dip selection) could be a points earner.

Challenges ahead: Klopp gets off to a difficult start as Liverpool boss

German miracle worker Jurgen has arrived at Liverpool but you must be very wary about backing Klopp for success in the very early stages.

With no support for Daniel Sturridge up front and a seriously leaky defence at the back, it could take Klopp a good few weeks to settle in to life at Liverpool.

In Tottenham this weekend, the Reds will face a team riding on the crest of a wave themselves, still high from their 4-1 hammering of Manchester City three weeks ago.

It might as well be worth being wary about Arsenal’s trip to Watford.

Despite appearing to be back in form with their scintillating 3-0 win over Manchester United last time out, they now travel to Watford where they will take on one of the toughest defences in the league.

Theo Walcott is expected to get the nod up front once again, but can he break down Watford’s resilient back-line?

Potential: Redmond or other Norwich stars could flourish this weekend

Newcastle are conceding goals for fun – and therefore it might be time to throw aNorwich player into your team.

Nathan Redmond is the exciting option for the Canaries and will offer a goalscoring threat both as a scorer and a creator.

Don’t expect Newcastle to ship six again, but with young Freddie Woodman likely deputising between the sticks, a Norwich player could be the key.

Manchester City fans will be looking for Kevin De Bruyne to continue his fine form and ensure the leaders do not miss Aguero or Silva, who are both out injured.

You would expect City to find the scoresheet against Bournemouth and De Bruyne is the man most likely to create or score the goals which City will crave.

The Belgian continued his stunning form for his country during the week – and is probably worth a punt for double points this time around.

The next two weeks are very important for Manchester United. After visiting Everton, they have the Manchester derby at Old Trafford and follow that up with a tricky trip to Crystal Palace.

It might be worth steering away from their stars for a couple of weeks, while they get through a difficult patch.

Jurgen Klopp might be the buzzword, but his first six games are against Tottenham (A), Southampton (H), Chelsea (A), Crystal Palace (H), Manchester City (A) and Swansea (H). Tricky.